The Design and Construction of ‘Christ the Redeemer’

Standing 710 meters high, Corcovado Mountain is situated in the Carioca Range and overlooks the city of Rio de Janeiro. From the nineteenth century it was a frequent destination for those wanting to enjoy the views of Rio de Janeiro. 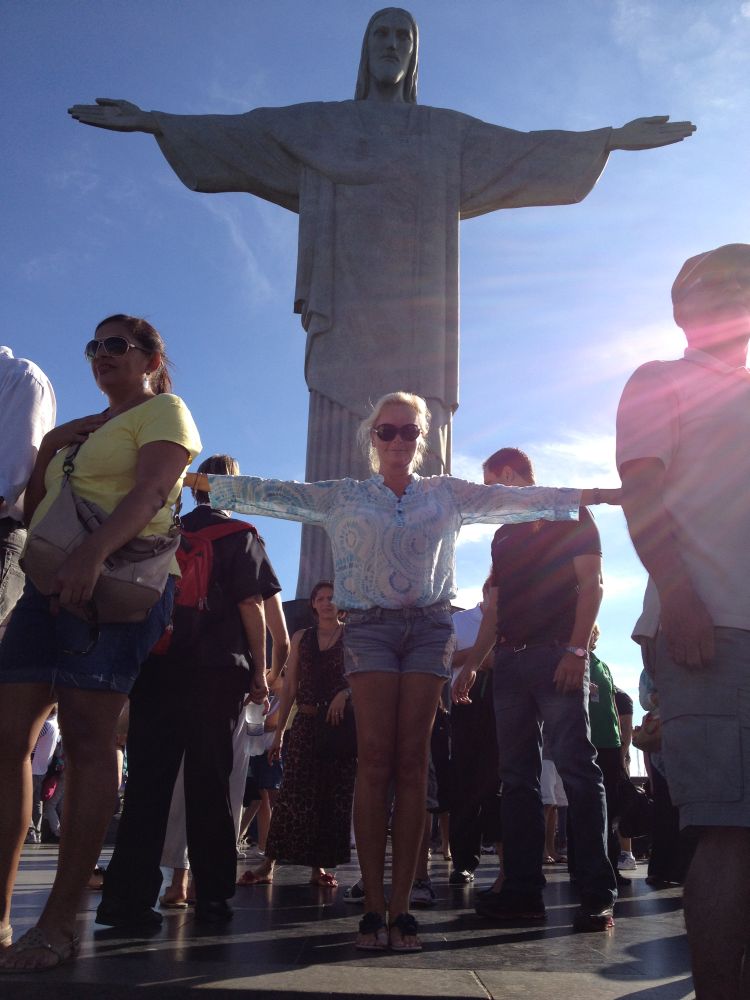 The Corcovado railway was built in 1884 using an innovative cog system that was brought to Brazil from Switzerland. It was 3827 metres long with four stations, the fourth one only 40 meters below the summit. 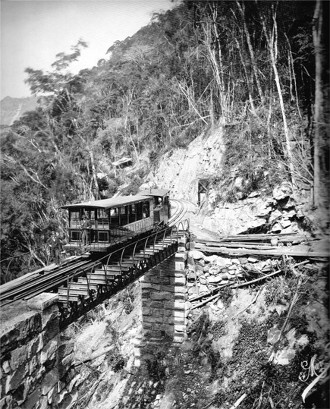 In 1906, shortly after the installation of electric street lighting and tramways in Rio de Janeiro, Corcovado railway became the first electric railway in Brazil, raising the annual passenger numbers to about 48,000.

In the early 1920’s, the Catholic Church, which had effectively ruled Brazil since the 1550’s, was starting to lose the support of Brazilian citizens, who were coming under socialist political and economic influences from Europe after The Great War.

Rio de Janeiro’s powerful Catholic Circle decided to create a religious monument to bring its people closer together – and to keep them in the fold of the church.

It was eventually decided that Corcovado Mountain was the perfect spot for the monument. Many designs were put forward for this prestigious project, but the architect and engineer Heitor da Silva Costa won the commission. His initial vision of Christ was a standing figure, holding a large cross with one hand and a globe in the other.

In February 1922, President Epitácio Pessoa received a petition signed by more than 20,000 women supporting the erection of a statue of Jesus Christ on Corcovado Mountain – prior to that, the project had been delayed by the Protestant Church and other religious groups complaining that the statue was conceived and backed by the Catholics. However, after seeing the petition, the President informed all groups that if they had come to him first with a similar idea, then they would have been granted permission. So the erection of the statue would go ahead as planned.

In September 1923, a fundraising event called ‘Monument Week’ took place, and in only seven days over 100,000 réis was raised, half of what was needed to build the statue. 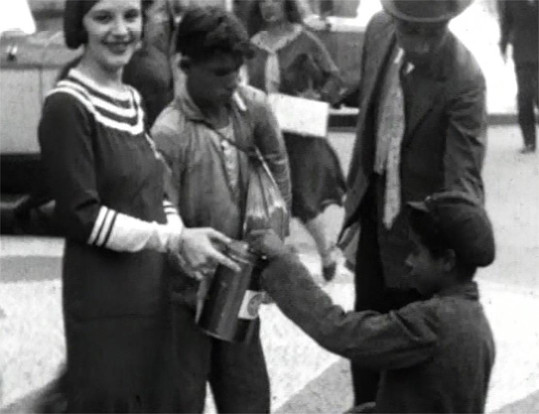 Heitor meanwhile, began to finalise his plans. He was inspired by radio antennas atop Corcovado Mountain to alter his original design, so that the figure of the Christ would form a large cross of 40 metres high by 40 metres wide across the arms. 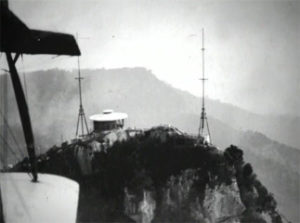 He selected a rocky area right on the summit as the perfect place for Christ to look down from.

Construction of Christ the Redeemer 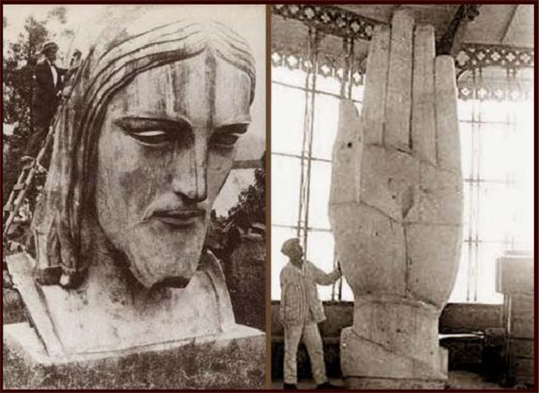 Heitor da Silva Costa came to the conclusion that he must use the recently-invented material of reinforced concrete for the structure, because a bronze statue would be far too heavy to heave up the mountain, and a metal framework would be visually unappealing and would also weather badly. He wrote in his journal:

“The public is used to seeing reinforced concrete in engineering work, pillars, columns etc, but I presented it as being able to serve for a work of art; it still seems unusual. However, this material is modern and the material of the future.”

In 1924, Heitor contacted the great master of structural engineering, Albert Caquot, in Europe to help find a sculptor who would be able to make the final scale model. He then met with many sculptors in Paris, Munich, Florence and Rome and eventually decided to work with the renowned sculptor, Paul Landowski, in Paris. While Landowski was busy making the moulds for both the hands and the Christ’s head, Albert Caquot was putting the finishing touches to the plans of the structure in reinforced concrete.

The total weight of the structure would be 1,145 tons, with the head weighing 30 tons alone and each arm weighing 80 tons.

“Your process was certainly excellent; mathematics shall always be the queen of architecture and even of sculpture.”

Heitor was keen to express to Landowski that the head and hands would be seen as a work of art – a sculpture – and the body and arms as architectural work. He commissioned him to construct a 4 metre replica of the statue. 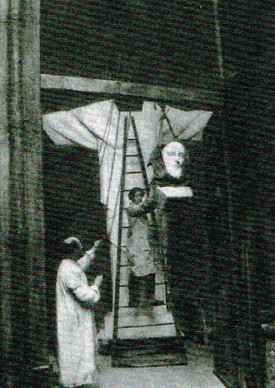 This photo shows Landowski in his new studio on Boulevard Saint Germains where he sculpted the 4 metre model.

Now that construction was underway, Heitor’s next problem was coming up with the external finish for the statue. He knew the reinforced concrete wouldn’t provide the artistic look the structure demanded. And in 1927, Heitor came across the perfect solution by chance – in a Parisian fountain he saw the walls were lined with a mosaic of small, triangular silver tiles. His immediate idea was to coat the outer shell of Christ with thousands of small ceramic or stone triangles. Within 24 hours, he had had several samples made at a local ceramic studio, of different sizes and using various materials, including soapstone.

Soapstone was widely used in the churches of Brazil, as it was readily available and because its colour never fades, it is resistant to the rain and sun, and does not expand or contract with changing temperature. Heitor decided that it was the perfect material for the mosaic he was proposing.

On hearing the idea, Landowski wrote to Heitor:

“I am fully enchanted with the result that you have achieved and cannot but congratulate you on your idea. I fully share your opinion that this material will have a nobler and richer effect, in addition to being completely resistant to everything.”

The idea was brought back to Rio de Janeiro, where society women met frequently in churches to stick the soapstone triangles onto sheets of mesh, which would later be used to cover every part of the Christ’s body, apart from the head and hands. It is said that some wrote the names of loved ones on the back of the tiles before sticking them down, sealing their love forever.

The construction of Christ’s body began in the middle of 1926 under the supervision of Heitor’s fellow architect, Heitor Levy, and engineers Antonio Ferreira Antero and Pedro Fernandes Vianna da Silva. 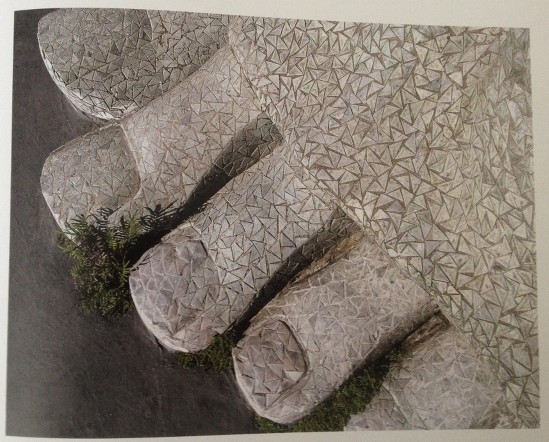 The work went on for five years and in that time, despite the dangerous conditions working at great heights, no man lost his life. 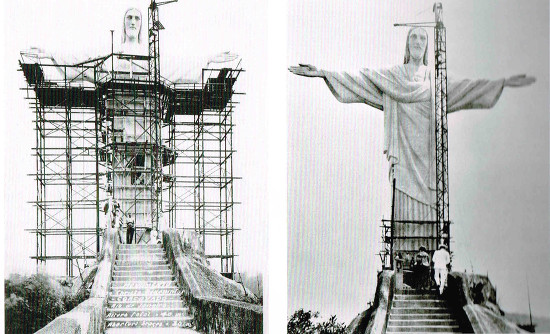 Christo Redentor, or Christ the Redeemer as the rest of the world know it, recently celebrated its eightieth birthday in 2011, and has gone on to become one of the new modern ‘Seven Wonders of the World’, with nearly 2million visitors each year.

If you would like to purchase the DVD “Arms Wide Open” made by Bel Noronha about her great-grandfather Heitor da Silva Costa and how he designed and constructed Christ the Redeemer, please contact olivia@lucindariley.co.uk