The premiere of Ibsen’s Peer Gynt 1876

Henrik Ibsen was a leading Norwegian playwright and wrote his five-act allegorical drama in 1867 while living in Italy. It tells the story of the downfall and subsequent redemption of a Norwegian peasant anti-hero, the eponymous Peer Gynt. Inspired by the Norwegian fairy tale Per Gynt, the characters were based on members of Ibsen’s family and it was a social satire, designed to analyse and criticize the romantic nationalist movement in Norway at the time. It was written in verse and wasn’t originally intended for stage performance.

Ibsen asked his friend Edvard Grieg to set the drama to music in 1874. Flattered to have received the invitation to transform a literary work that was ‘so permeated with the Norwegian spirit’, Grieg agreed at once, but he found it a very challenging task, taking considerably longer to finish than he had planned.

The music was completed in the autumn of 1875, and the play’s lavishly staged premiere took place on February 24th, 1876 in the Christiana Theatre in Norway’s capital, now called Oslo. The music was deemed a great success, though Grieg did not attend to see the production himself. Since then, the ‘Peer Gynt Suite’ has become iconic with ‘Morning Mood’ and ‘In the Hall of the Mountain King’ known by ear, if not name, all over the world.

The lead roles were taken by renowned Norwegian actors of the day – Henrik Klausen as Peer Gynt and Thora Hansson as Solveig: 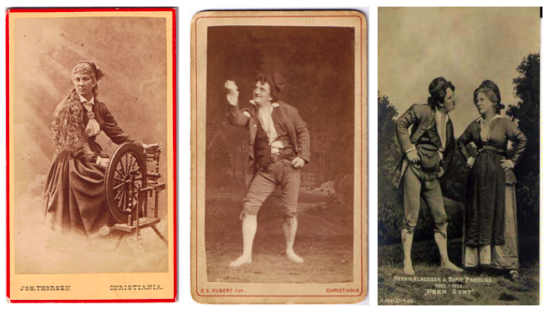 However, Thora Hansson’s voice was deemed unsuitable for the role and an unknown young girl from the country was asked to sing Solveig’s poignant songs whilst Thora mimed. The name and background of the original singer is unrecorded, but this character is portrayed by Anna in The Storm Sister.

Grieg continued to add new pieces and re-orchestrate much of the music. The final score was published in 1908, a year after Grieg died, with 23 pieces lasting a total of nearly 90 minutes. Second to Grieg’s Piano Concerto, the Peer Gynt Suite No.1 is the composer’s most popular work.